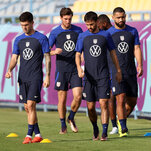 The last time the United States men’s national team played at the World Cup, the team carried a noticeable German accent: Five players on that 2014 squad grew up in Germany, as did their head coach.

But that was then. In the eight years that have passed, the squad has developed an English lilt.

Three current U.S. national team players were born in England. A fourth spent a significant portion of his adolescence, and received most of his soccer training, in the country. And even Christian Pulisic — the face of the squad, a Pennsylvania native nicknamed “Captain America” — spent one of his formative years in Tackley, a small village near Oxford, England.

The English influence on the American squad has been mutually beneficial for the team and the players, even if it has caused some chaos in their home lives before the countries meet in a highly anticipated Group B showdown on Friday night.

“With my family, half of them want us to win,” said Cameron Carter-Vickers, a central defender who was born in Southend-on-Sea, on England’s southeast coast, “and half want England to win.”

Carter-Vickers and left back Antonee Robinson were born in England and lived their entire adolescent lives there (both have American fathers). Forward Gio Reyna, was born in Sunderland and lived in England until he was five while his father, Claudio, was playing in the Premier League.

What is the World Cup? The quadrennial event pits the best national soccer teams against each other for the title of world champion. Here’s a primer to the 2022 men’s tournament:

Where is it being held? This year’s host is Qatar, which in 2010 beat the United States and Japan to win the right to hold the tournament. Whether that was an honest competition remains in dispute.

When is it? The tournament opened on Nov. 20, when Qatar played Ecuador. Over the two weeks that follow, four games will be played on most days. The tournament ends with the final on Dec. 18.

Is a winter World Cup normal? No. The World Cup usually takes place in July. But in 2015, FIFA concluded that the summer temperatures in Qatar might have unpleasant consequences and agreed to move the tournament to the relatively bearable months of November and December.

How many teams are competing? Thirty-two. Qatar qualified automatically as the host, and after years of matches, the other 31 teams earned the right to come and play. Meet the teams here.

How does the tournament work? The 32 teams are divided into eight groups of four. In the opening stage, each team plays all the other teams in its group once. The top two finishers in each group advance to the round of 16. After that, the World Cup is a straight knockout tournament.

How can I watch the World Cup in the U.S.? The tournament will be broadcast on Fox and FS1 in English, and on Telemundo in Spanish. You can livestream it on Peacock, or on streaming services that carry Fox and FS1. Here’s how to watch every match.

When will the games take place? Qatar is three hours ahead of London, eight hours ahead of New York and 11 hours ahead of Los Angeles. That means there will be predawn kickoffs on the East Coast of the United States for some games, and midafternoon starts for 10 p.m. games in Qatar.

Midfielder Yunus Musah was born in New York, but never lived there. His family lived in Italy until he was nine, then moved to England. Musah, who is of Ghanaian descent and now plays in Spain, speaks four languages. But his English makes him sound like a Londoner.

Musah represented England youth national teams more than 30 times before switching to the United States after a period of heavy recruitment by Coach Gregg Berhalter and his staff.

“I made the decision because I was born in the U.S., that was one of the main reasons, and also having this opportunity at such a young age was something I was going to take,” Musah said this week.

Multiculturalism is not a new characteristic of the American men’s team: the United States is a nation of immigrants, and soccer, particularly in the 20th century, was often viewed as an immigrants’ game.

But the German and English flair of these recent teams has some more intentional foundations, too. For players growing up in countries with strong soccer traditions and highly ranked national teams, like Germany and England, the path to a World Cup roster can seem insurmountable. For those who qualify, then the United States team, despite its promise, can offer a slightly more open road. The Americans are the second-youngest team at this World Cup and are plainly in a period of rebuilding.

The U.S. team’s German influence eight years ago, for example, was no coincidence: the team’s coach, Jurgen Klinsmann, was a former star player for Germany and viewed his home country as a repository of overlooked talent.

At the 2014 World Cup, the United States had four German-born players on its roster (John Brooks, Jermaine Jones, Timothy Chandler and Fabian Johnson) and one player (Julian Green) who was born in America but raised in Germany.

Reyna said he never considered playing for another country, despite also being eligible for Argentina, England and Portugal. Musah, Carter-Vickers and Robinson admitted harboring childhood hopes of representing England before experiencing changes of heart based on circumstance.

Robinson, for instance, was going through a rough period as a teenager in the youth program at Everton, an English club, feeling as if his talents were being ignored while his teammates were getting recruited by England. The offer from the United States to represent the country at the under-18 level came at a crucial time in his psychological development.

“I watched the favorite guys at Everton get called up for England and stuff, so to get called up for the U.S. just made me feel 10-feet tall and grew my confidence a lot,” he said. “They sort of inspired that hope in me as a player at the time, so it was a no-brainer.”

worldnews.vip - April 22, 2022
Get the best content from around the world in one site news, music fashion and entertainment.
Contact us: admin@worldnews.vip