North Korea has fired a ballistic missile over Japan for the first time since 2017, sparking emergency public alerts amid a sharp rise in provocations by Pyongyang.

Officials in Seoul and Tokyo said the missile was launched from North Korea’s Jagang province early on Tuesday and fell outside Japan’s exclusive economic zone, which stretches 200 nautical miles from the coast.

Japan’s prime minister Fumio Kishida condemned the launch as “barbaric”, while the US described the latest test as “dangerous and reckless”. Some train services in northern Japan were briefly suspended but government officials said no damage had been reported.

North Korea has carried out more than 20 separate missile tests this year, escalating tensions in the region.

The launch on Tuesday was the fifth in 10 days, following trilateral military drills between the US, South Korea and Japan and a recent visit to the region by Kamala Harris, the US vice-president.

Japan estimated the missile reached an altitude of 1,000km and travelled about 4,600km.

“It was the longest ever range,” said Yasukazu Hamada, Japan’s defence minister. “Whatever the motive, the repeated ballistic missile launches by North Korea are unacceptable and we cannot overlook the significant improvement in its missile technology.”

Shunji Hiraiwa, an expert on North Korea at Nanzan University in Japan, said the range implied that Pyongyang may have achieved its goal of developing a missile that could reach Guam, the US territory. “It’s a serious progress in technology within the past five years,” he said.

Several missile experts have concluded that the projectile was probably a Hwasong-12 intermediate-range ballistic missile, which was last tested from the same site in North Korea’s northern Jagang province in January.

North Korea also fired two short-range ballistic missiles on Saturday, firing the projectile from a site near Pyongyang into the Sea of Japan, which is known in Korea as the East Sea.

On Monday, Japan’s defence ministry announced that the missile launched on Saturday had travelled farther than initially thought, citing its “irregular trajectory”.

An analysis published by Nikkei last week suggested that almost 40 per cent of North Korean missiles tested since 2019 had “variable trajectories”, illustrating Pyongyang’s considerable progress in developing a new generation of manoeuvrable weapons that can be both more precise and much harder to intercept and destroy. 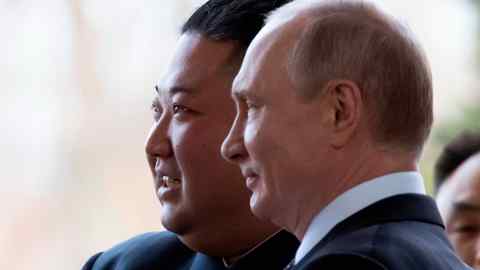 North Korea’s flurry of missile tests followed its adoption last month of an updated nuclear law that envisages pre-emptive strikes in a wide range of scenarios, including if the country or the government was attacked by conventional forces.

Announcing the new policy, North Korean leader Kim Jong Un declared that “there will never be any declaration of ‘giving up our nukes’ or ‘denuclearisation’, nor any kind of negotiations or bargaining to meet the other side’s conditions”.

Go Myong-hyun, senior fellow at the Asan Institute for Policy Studies in Seoul, noted that the last time North Korea fired a missile over Japan, Pyongyang followed with a nuclear test a week later.

Pyongyang has finalised preparations for its seventh nuclear test, according to the US and South Korean governments, although it is not expected to go ahead with it ahead of China’s quinquennial party congress this month.

“North Korea does not tend simply to conduct a nuclear test out of the blue,” said Go. “It prefers to build up the tension and the anticipation with a series of provocative steps so that when the nuclear test comes, it maximises the spotlight on its message: that we are a nuclear state and there’s nothing you can do about it.”

I at all times knew highly effective individuals had blind spots – now neuroscience...

The place do sports activities drinks stand in a rising practical beverage market?

Get pleasure from Some Spooky Encounters for DUNGEONS & DRAGONS with TALES OF THE...

worldnews.vip - October 31, 2022
Get the best content from around the world in one site news, music fashion and entertainment.
Contact us: admin@worldnews.vip