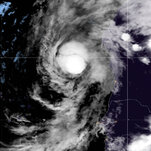 Tropical Storm Hermine formed in the Eastern Atlantic on Friday and was expected to bring two to four inches of rain to the Canary Islands, causing flash flooding in some high-terrain areas, forecasters said.

As of 5 p.m. Eastern, Hermine, which was 290 miles northeast of the Cabo Verde Islands and heading north-northwest at 10 miles per hour, had maximum winds of 40 m.p.h., according to the National Hurricane Center.

Forecasters said the storm was expected to strengthen through Saturday before weakening on Sunday and possibly becoming a remnant on Monday.

Also on Friday, the Cayman Islands issued a hurricane watch and Jamaica issued a tropical storm watch for Tropical Depression Nine, which was expected to become a hurricane by early on Monday. Should the tropical depression develop into a hurricane, it would likely be named Ian.

Gov. Ron DeSantis of Florida declared a state of emergency for 24 counties on Friday ahead of the expected storm, including Broward, Miami-Dade and Palm Beach. Under the order, money would be freed up for protective measures and the National Guard would be activated, Mr. DeSantis said.

Hermine is the eighth named storm of the 2022 Atlantic hurricane season and the third active named storm in the Atlantic. A storm is given a name after it reaches wind speeds of at least 39 miles per hour.

Fiona, which formed on Sept. 15, strengthened into a Category 4 hurricane. It was bearing down on Canada’s Atlantic provinces on Friday after lashing Bermuda, Puerto Rico and the eastern Dominican Republic.

Tropical Storm Gaston, which formed on Tuesday, was bringing strong gales to the Azores in the North Atlantic on Friday as it approached from the west.

The Atlantic hurricane season, which runs from June through November, had a relatively quiet start, with only three named storms before Sept. 1 and none during August, the first time that had happened since 1997. Storm activity picked up in early September with Danielle and Earl, which formed within a day of each other.

In early August, scientists at the National Oceanic and Atmospheric Administration issued an updated forecast for the rest of the season, which still called for an above-normal level of activity. In it, they predicted the season — which runs through Nov. 30 — could see 14 to 20 named storms, with six to 10 turning into hurricanes that sustain winds of at least 74 miles per hour.

Three to five of those could strengthen into what NOAA calls major hurricanes — Category 3 or stronger — with winds of at least 111 m.p.h.

Last year, there were 21 named storms, after a record-breaking 30 in 2020. For the past two years, meteorologists have exhausted the list of names used to identify storms during the Atlantic hurricane season, an occurrence that had happened only one other time, in 2005.

The links between hurricanes and climate change have become clearer with each passing year. Data shows that hurricanes have become stronger worldwide during the past four decades. A warming planet can expect stronger hurricanes over time, and a higher incidence of the most powerful storms — though the overall number of storms could drop, because factors like stronger wind shear could keep weaker storms from forming.

Hurricanes are also becoming wetter because there is more water vapor in the warmer atmosphere; scientists have suggested storms like Hurricane Harvey in 2017 produced far more rain than they would have without the human effects on climate. Also, rising sea levels are contributing to higher storm surge — the most destructive element of tropical cyclones.

worldnews.vip - September 24, 2022
Get the best content from around the world in one site news, music fashion and entertainment.
Contact us: admin@worldnews.vip