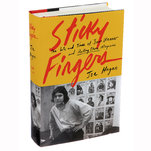 For the next few months, we’re sharing some of our favorite conversations from the podcast’s archives. This week’s segments first appeared in 2017 and 2019, respectively.

Jann Wenner, the co-founder and longtime editor of Rolling Stone magazine, has a new memoir out — but it’s not the first book to tell his life story: In 2017, the journalist Joe Hagan published a biography, “Sticky Fingers,” that Wenner authorized and then repudiated after it included unflattering details. Hagan was a guest on the podcast in 2017, and explained his approach to the book’s most noteworthy revelations: “I made a decision, really at the outset, that I was going to be honest with him and always be frank with him,” he told Pamela Paul and John Williams. “And if I came across difficult material, I was just going to address it with him. So in that way, it kind of let some of the pressure off. And by the end, we reached a point where I really tried to present him with the most radioactive material and make him aware of what I knew, so he wouldn’t be surprised.”

Also this week, we revisit a 2019 conversation among Williams and The Times’s staff book critics Dwight Garner, Jennifer Szalai and Parul Sehgal about their list ranking the 50 best memoirs of the past 50 years. No. 1: “Fierce Attachments,” by Vivian Gornick.

We would love to hear your thoughts about this episode, and about the Book Review’s podcast in general. You can send them to books@nytimes.com.

Airbnb now helps you to seek for stays with superb views

worldnews.vip - July 19, 2022
Get the best content from around the world in one site news, music fashion and entertainment.
Contact us: admin@worldnews.vip

5 ladies who ought to have gained a Nobel Prize