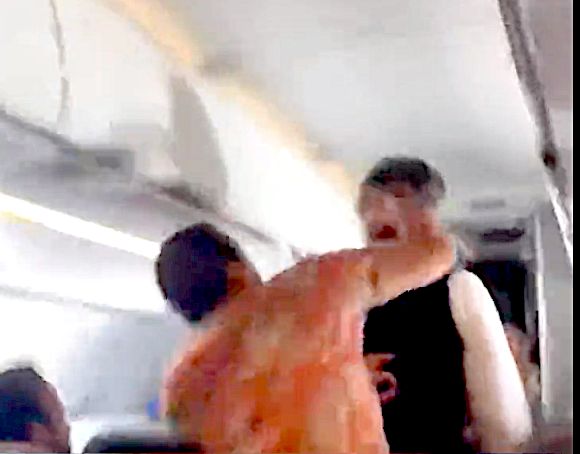 Alexander Tung Cuu Le, 33, of Westminster, in Southern California, was arrested when the aircraft landed at Los Angeles International Airport, according to an American Airlines official. He was charged Thursday with one count of interference with flight crew members and attendants, which carries a maximum penalty of up to 20 years in prison, said a statement by the U.S. Attorney’s Office for the Central District of California.

According to the statement, Le grabbed a flight attendant’s shoulder and demanded coffee about 20 minutes after the aircraft took off. He also allegedly disrupted passengers by hanging out near the first-class section of the cabin.

A video taken by fellow passenger Barrie Livingstone shows Le apparently initially swinging his arm at the flight attendant but missing. As the attendant turned to walk away, Le can be seen rushing forward to strike the attendant in the head, eliciting cries of concern and outrage on the aircraft. The attack was “witnessed by several passengers,” the Justice Department said.

Le then “fled” to the back of the plane, where he was “apprehended by several passengers” and crew members, the statement added.

Le’s “hands and legs were cuffed,” but he “continuously unbuckled his seatbelt, causing flight attendants to restrain him to the seat with seatbelt extenders,” officials noted.

Le has been barred from all future flights by American Airlines.

“Acts of violence against our team members are not tolerated by American Airlines,” said a statement from American. “The individual involved in this incident will never be allowed to travel with us in the future, and we will work closely with law enforcement in their investigation.”

The airline thanked crew members and passengers for restraining Le until the aircraft was met by law enforcement at LAX.

Le appeared Thursday at the U.S. District Court in downtown Los Angeles, where he was charged.

The hearing was continued to Monday, Ciaran McEvoy, a spokesperson for the U.S. attorney’s​ office, told SFGate. “That will be a detention hearing to determine his bond, if any. Mr. Le has not pleaded to anything yet,” McEvoy added.

Attacks on flight attendants have skyrocketed in the last two years, largely triggered by sometimes violent, defiant responses to requirements to wear masks earlier in the COVID-19 pandemic. The Federal Aviation Administration logged an incredible 5,981 “unruly passenger reports last year. In 2020, the FAA investigated only 183 reports.

Charli XCX: I used to be at all times up for getting down and...

worldnews.vip - August 29, 2022
Get the best content from around the world in one site news, music fashion and entertainment.
Contact us: admin@worldnews.vip